To some scientists and doctors, fish is a miracle food, a treasure trove of heart-healthy fatty acids and disease-fighting vitamins. To others, it’s a culinary curse, the carrier of health-endangering toxins.

Which is it? The confusion is enough to make you go off the deep end.

Some things are clear. There’s little doubt, for example, that certain types—particularly cold-water fish such as salmon, herring, anchovies and Atlantic mackerel—rank as the top food source of omega-3 fatty acids, the fats believed to protect the heart, brain and other organs. Most seafood is also rich in other key nutrients and low in “bad” fats and calories.

On the flip side, headlines continue to warn that fish contains mercury, polychlorinated biphenyls (PCBs) and dioxins that have polluted some lakes, seas and rivers and are linked to a greater risk of liver disease, neurological problems and possibly cancer.

So, will eating seafood bolster your health or hurt it?

If you’re 50 or older, dive in, say experts: The benefits—and there are many, among them a lower risk of dementia, vision loss and dying from heart disease—far outweigh the risks.

“There is plenty of nutrition in fish, but most of the evidence points to omega-3s as the big-ticket benefit,” says Harvard Medical School cardiologist Dariush Mozaffarian, M.D., who as the author of several major medical studies may be the nation’s most prolific researcher on the health impact of seafood.

There are several types of omega-3s, some found in nuts and vegetable oils. But fish provides the highest amounts of two important types known as fish oil. DHA (docosahexaenoic acid), which is abundant in breast milk, accumulates in the brain, heart, eyes and other membranes to protect those organs. EPA (eicosapentaenoic acid) primarily helps keep immunity strong and is believed to fight inflammation. Together, as they are in most seafood, they provide a one-two punch against many age-related and other conditions—particularly heart disease. Most health benefits come from the equivalent of 250 to 500 milligrams a day of DHA and EPA—what’s found (and stored in the body) in about two servings of fatty fish a week.

“DHA and EPA are known as ‘essential fatty acids,’ meaning you have to eat them to get them. But as you age, the body doesn’t absorb and convert them as well,” says Ernst Schaefer, M.D., senior scientist at the Jean Mayer USDA Human Nutrition Research Center on Aging and a professor of medicine and nutrition at Tufts University School of Medicine. “This makes for a stronger argument to eat more fish as you get older.”

Although omega-3 fish oils get most of the health-boosting kudos, they’re not the only reason why seafood rates high on the good-for-your-health list.

“Fish is a terrific source of protein and helps control blood sugar levels,” says nutritionist Joy Bauer, who regularly appears on the Today show and is author of the New York Times bestseller Food Cures. Fatty fish like salmon and sardines are also loaded with vitamin D, she says, with as much as 400 international units per serving, compared with just 100 IUs in a cup of milk. Bauer adds that certain types of fish—including tuna, halibut and salmon—contain selenium, an antioxidant that may reduce the risk of some cancers and is believed to neutralize the damage caused by mercury.

So why the concern that seafood may not be safe to eat?

“You shouldn’t not eat fish because you are worried about contaminants,” says Mozaffarian. “The levels of PCBs and dioxins in fish are very low, and similar to those in everything else we eat. In fact, less than 10 percent of the PCBs and dioxins in the American food supply come from fish; 90 percent come from vegetables, meat and dairy.”

You Are What They Eat

What do salmon eat?
For survival and growth, both farmed and wild-caught salmon need a well-balanced diet of
protein, vitamins, minerals, and pigments. In the wild, salmon eat zooplankton and fish. About
10 pounds of prey is needed to make one pound of wild-caught salmon. This means wild salmon
have a food conversion rate (FCR) usually around 10:1.
Commercial Salmon Facts
Atlantic salmon, Salmo salar, are more closely related to brown trout than to the Pacific
salmon of the genus Onchorhynchus. Atlantic salmon have been domesticated and selectively
bred for many generations. They are the primary species used in fish farming. They are
grown in net pens in coastal waters and are typically harvested at a weight of 8 to 10 pounds
and a length averaging 28 to 30 inches. Greatly reduced populations of wild Atlantic salmon
still spawn in rivers on both sides of the Atlantic. Historically of great commercial
importance, today less than 1% of commercially available Atlantic salmon are from the wild.
Chinook salmon, Onchorhynchus tshawytscha, also known as king salmon, live from San
Diego to Japan with successful new populations in the Great Lakes and New Zealand.
Chinook is the largest of the Pacific salmon species weighing on average 20 pounds and
ranging from 30 to 40 inches in length. Small quantities of farmed Chinook salmon can be
found in the marketplace.
Sockeye salmon, Oncorhynchus nerka, also known as red salmon, is an important commercial
species in British Columbia and Alaska. Its bright red flesh is prized for canning and for fresh
and frozen products. It is the second most abundant Pacific salmon species. The average
weight of fish in the market is approximately 6 pounds and reaches up to 34 inches in length.
Landlocked sockeyes are called kokanee and are popular with recreational fishers.
Coho salmon, Oncorhynchus kisutch, also known as silver salmon, live from northern Baja
California to Korea. The average weight is 10 pounds and they range from 25 to 35 inches in
length. Small quantities of coho salmon are also farmed and can occasionally be found in the
marketplace.
Pink salmon, Onchorhynchus gorbuscha are also known as humpback salmon because of
their large hump when releasing eggs. Pinks are the smallest but most abundant Pacific
salmon, generally weighing 2 to 3 pounds with a length up to 30 inches. They live from Puget
Sound to Russia. Most pinks are canned and tend to cost less than other types of salmon.
Chum salmon, Onchorhyncus keta, are also known as silver-bright, keta, or dog salmon.
Chum is the second most abundant Pacific salmon. The average weight is 8 pounds and they
can grow to 27 inches long. They are relatively easy to farm, and large hatchery programs in
Japan and southeast Alaska complement wild populations. Chum are harvested commercially
in large numbers when they return to their release site. Like the pink salmon, chums tend to
cost less than other types of salmon. They are sold canned, smoked, and as fresh, and frozen.
3
Farmed salmon need the same well-balanced diet to live and grow. They are fed a combination
of fish meal, fish oil, and other land-based protein sources. The FCR is usually around 1:1, so
about one pound of feed is needed to make one pound of farmed salmon. However, it should be
noted that the water content in prey is much higher than in feed.
Some nutrients in prey and feed are considered essential because the fish is unable to make them
and they must come from the diet. One such nutrient is the orange pigment called astaxanthin,
which is in the same family of nutrients as vitamin A. It is a powerful antioxidant that is thought
to be involved in ovarian development, hatching, survival, growth, and respiration of salmon.
Astaxanthin is also what causes the reddish-orange color of salmon flesh. The color of wildcaught
and farmed salmon can vary widely from red to orange-red, rose, pink and even white.
The color depends mostly on the amount of astaxanthin in what salmon eat. Wild-caught salmon
get natural astaxanthin from the prey they eat. Farmed salmon get natural or added astaxanthin
from the feed they eat.

Antibiotics and Hormones
In the U.S., the FDA regulates antibiotics which are used to treat ill farm-raised animals including
fish, swine, cattle, and chickens (except in certified organic animal culture). Veterinarians
oversee the way antibiotics are used when they are needed. Farmers must follow U.S.
Environmental Protection Agency (EPA) and FDA regulations that monitor use and
environmental impacts. These regulations also make sure antibiotics are used for the shortest
time possible so residual traces do not go above the FDA level of concern.  I searched long and hard and found some good news..Supposedly there are no hormones used in salmon farming or added to salmon diets.  So hormones are not a huge concern when choosing your salmon. 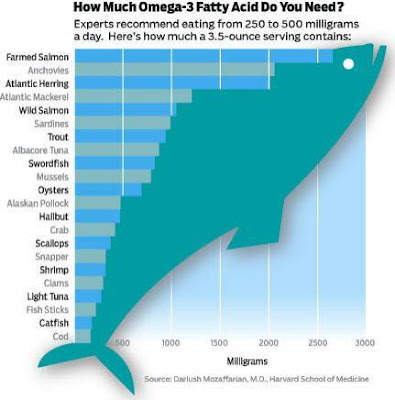