I wanted to post this picture as one of our friends recently asked a great question.  We had given her one of our baby SCOBY’s last week and she had started her first batch of Kombucha this week.  Her question was that her SCOBY was forming a white patch on it, is that mold?  My answer about any mold question and the SCOBY is to touch it, see if it is attached to the SCOBY.  If it is, it’s probably not mold.  Also smell it — if there is an odd odor, don’t take a chance and toss it.  It is common that as the heart of the SCOBY starts to grow, it can appear white at first.  Over time, as the SCOBY ages and eventually has babies, that white part will turn black and that is the time to throw the old SCOBY away and start using one of its babies.

And remember that doing a Google search for SCOBY images can give you a better idea of what other people’s SCOBY’s look like.

Here is a picture of our SCOBY in the Kombucha after sitting out for the first week.  This SCOBY is about 3 months old.  Note: even this old of a SCOBY still has some white on it.: 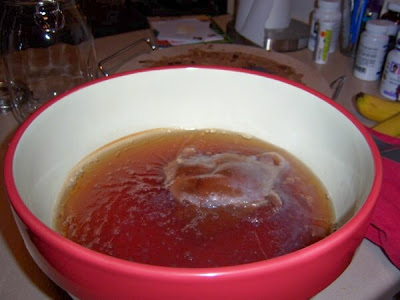