Who here loves coconut?  And who here eats a ton of coconut (milk, shredded, flour, water) on their Maximized Living Nutrition Plan?  Hands up!  I am about to share with you a kitchen tool designed specifically to make your life with the coconut 1000 times easier.

It’s called The Coconut Tool, and it was designed, patented, and mass produced by a friend of mine (who also happens to be a Minneapolis area Maximized Living doctor) Dr. Hugh Wegwerth.  He started with a vision, and turned that vision into an amazing tangible tool that has revolutionized the way the world deals with fresh raw coconuts.  The Coconut Tool came to be after Dr. Hugh struggled to get the meat out of a fresh coconut.  He, like so many of us, wanted to reap the health benefits of fresh raw coconut meat, but found it impossible to get the meat out of the coconut.

His plan?  Design a kitchen tool that helps you remove the fresh raw meat from the coconut in a minute flat!  The old way of getting the meat out involved making a mess, using a special shredder to slowly shred all the meat out, or being strong enough to chop the coconut (shell and all) in to pieces, baking the coconut in attempts to loosen it from the shell (yes, I said baking it…hmmm, damaging affects to the raw quality?), and then you still had to peel the meat after all that.  Phew!  I’ll be honest and say it was way too much work for me, and it made a huge mess that I didn’t feel like cleaning up afterward.  We had used fresh coconut meat maybe a handful of times in the four years we’ve been married, and I never planned to buy fresh again.  Until now! 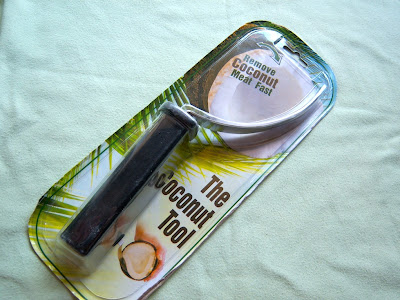 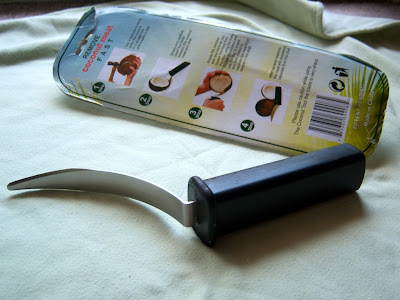 Think about how much money you can save by purchasing your coconuts fresh and whole, and making your own coconut everything!  Well, almost everything.  :)  I’ll still buy my coconut oil in bulk, but this tool seriously makes pulling the meat out so fast and easy that I’ll be making our own coconut milk, flour, and shreds, and in the long run I’ll be saving $$$ and gaining huge nutrient benefits along the way.  Check it out!  Here’s how to use The Coconut Tool (and I didn’t even need to ask my husband for help!  You don’t need to be big and strong to use this gadget!):

What you need to get started:

(How to tell if a coconut is fresh and ripe?  Hold it up to your ear and shake.  You should be able to hear the water splash around inside.  If you don’t hear the water, that’s and old coconut.) 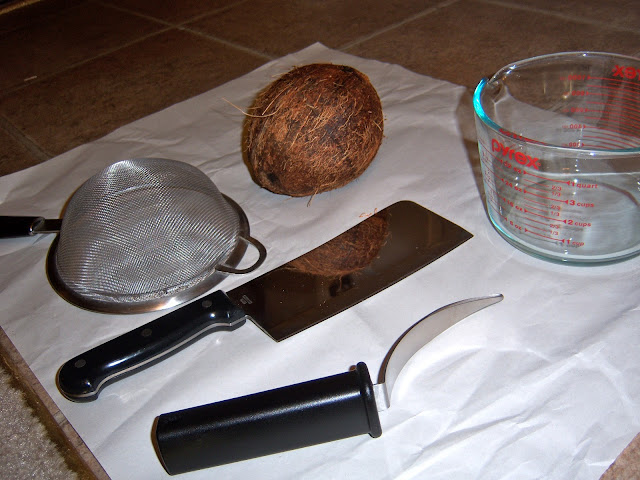 Start by cracking open the coconut.  Look for the line around the coconut (the “equator”).  You’ll aim the blunt end of your cleaver (or hammer) at this line. 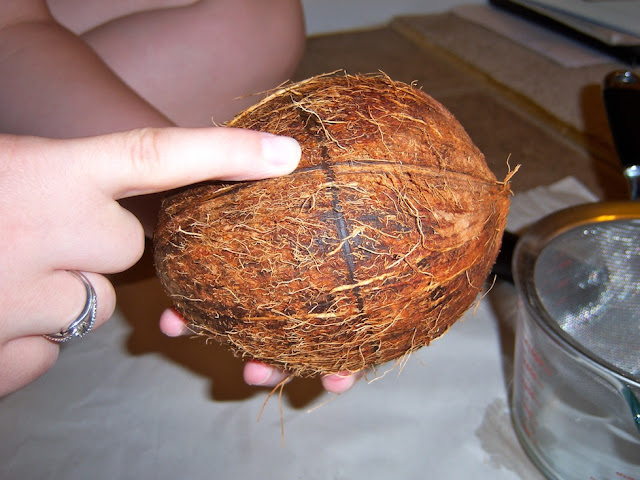 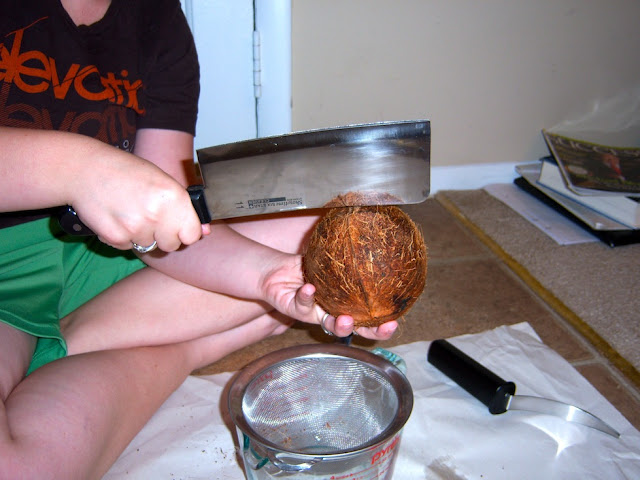 Give the coconut a good one or two whacks, the rotate a few inches down the “equator” and whack one or two more times.  Continue around the entire equator.  Have a bowl on hand with mesh strainer resting inside.  This will catch the coconut water as it spills out when the coconut splits in half. 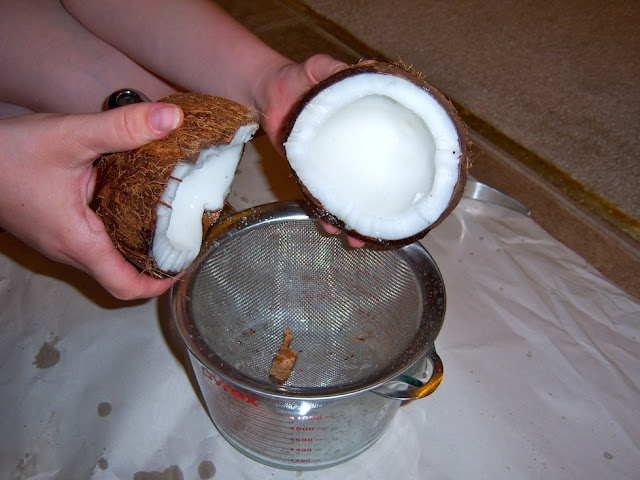 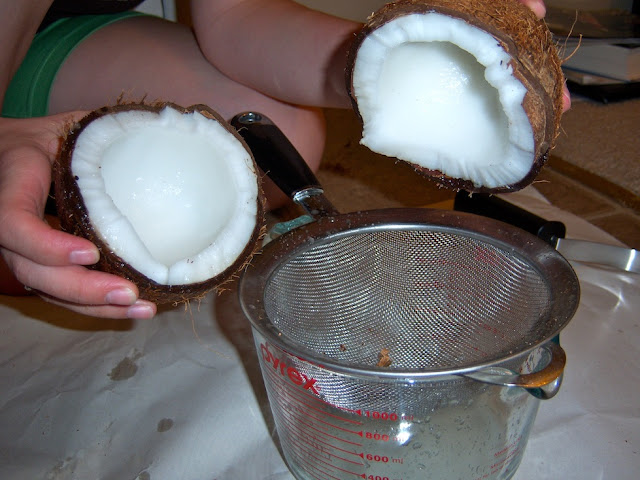 Grab your Coconut Tool firmly in your good hand (I’m a righty).  Insert the tip of the tool in between the coconut meat and the brown hard shell.  It should slip right in with a little pressure. 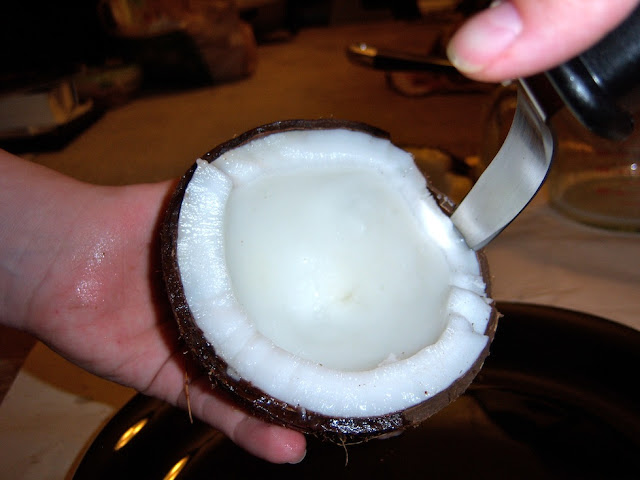 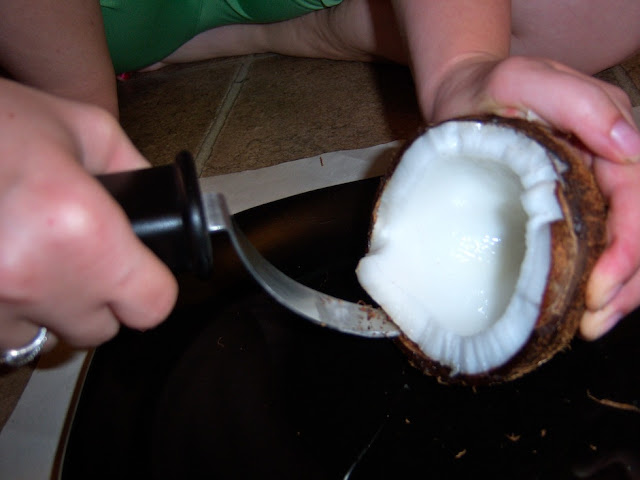 Carefully rock and scrape the tool back and forth, gliding it around the entire inside of the shell.  I found it easiest for my little hands to use the aid of the table to anchor my work.  My husband tested the tool out on a second coconut and he just stood holding it, gliding through with ease (bigger hands, haha). 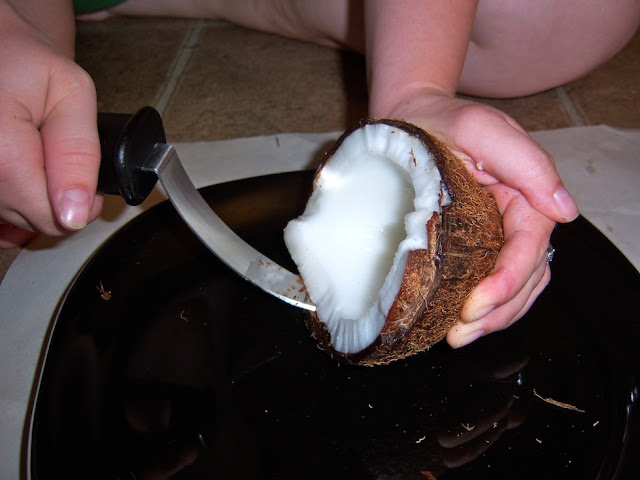 In about 3-4 turns of the coconut you’ll have made your way around.  It takes all of 60 seconds!  And *pop* out comes your coconut meat!  It’s that simple! 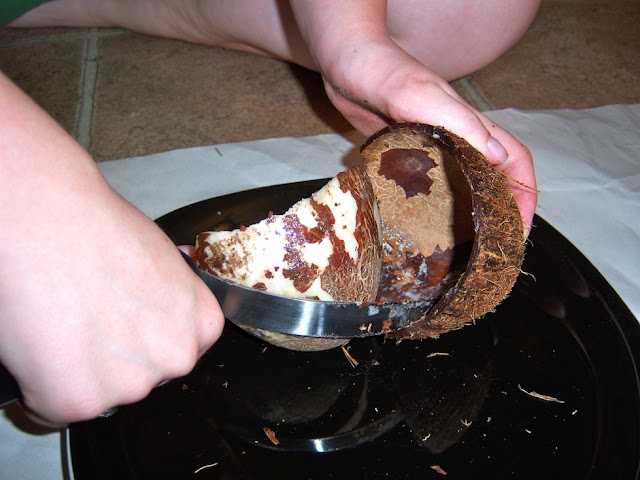 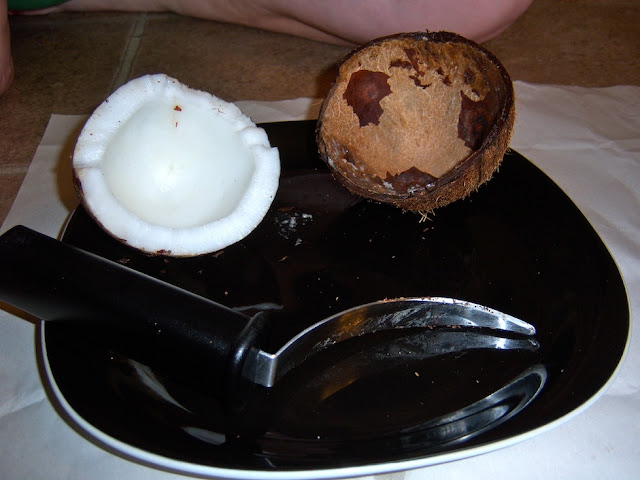 To finish the job, you can use a sharp vegetable peeler to take off any left behind scraps of the brown papery shell lining.  Then you can start turning your meat into yummy creations! 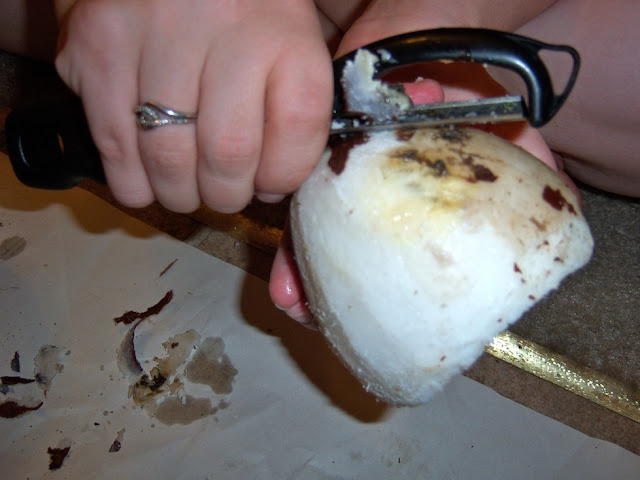 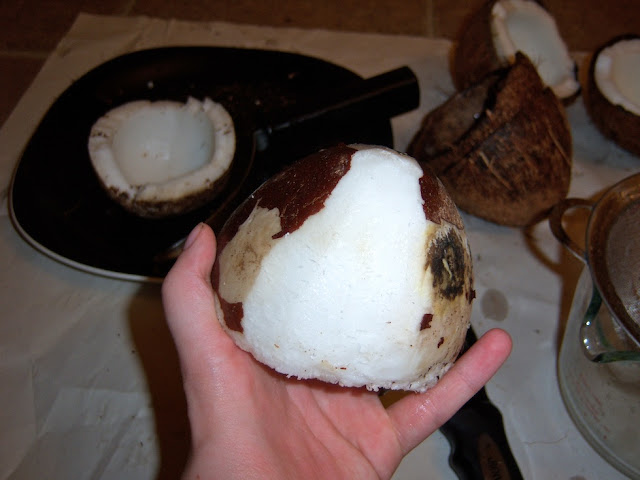 You can get your own Coconut Tool here.  I promise, you will not be disappointed!  See what other users are saying.  I can say personally this tool is THE BOMB!  We are going to be enjoying fresh coconut a lot more often now!  It’s now on my list of kitchen must haves!

Now, here is what we made with our first Coconut Tool try: fresh raw full fat coconut milk, shredded coconut AND coconut chips!

First, the Better Than Store Bought Coconut Milk.  I forgot to take a picture while blending… but, all you need to do is chop up the meat of a whole coconut into rough chunks.  Drop into your blender.  Add 1 cup of filtered water and blend away.  A Vitamix blender will give you the best coconut milk I expect, but I just have a simple Bullet style blender.  Depending on the quality of your blender, you’ll have some of the coconut solids left behind in varying thicknesses.  Strain out the coconut milk from the solids using a nut bag or a fine mesh strainer.  And voila!  You are left with the richest creamiest and freshest coconut milk you have ever tasted! 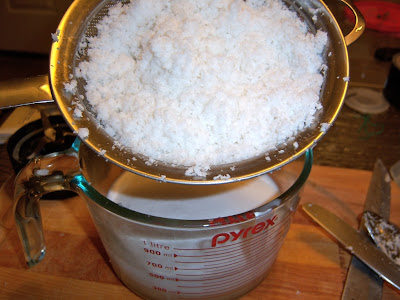 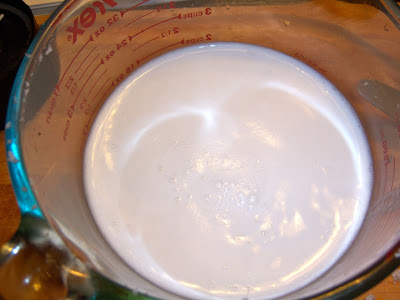 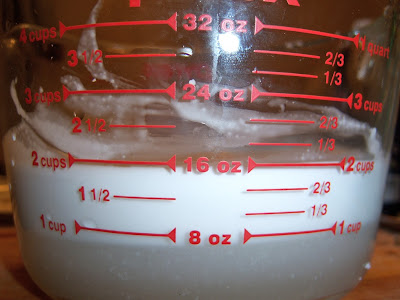 The shredded coconut pulp that is left behind can be used in baked goods, add on top of salads, blend again in your smoothies, whatever you’d like!  I put mine into the freezer for later use in my Blueberry Bread. 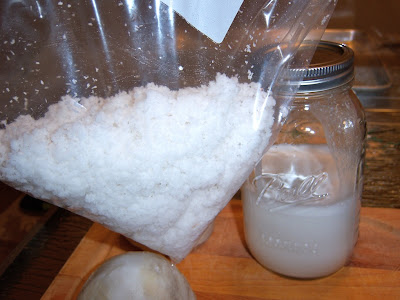 And finally, lightly toasted Coconut Chips.  Super simple!  Take the meat of one coconut.  Run it through a slicer (I used the slicer blade in my food processor).  Spread the sliced chips out on a baking sheet.  Place in a 350 degree F oven and bake for about 15 minutes, or until the edges of most of the pieces are a light brown and fragrant.  Remove from the oven and sprinkle with 1 teaspoon of sea salt.  Let cool and store in an air tight container in the fridge.  So easy, and they make a delicious and nutritious snack or salad topping!

And that is everything we made with our first two coconuts and The Coconut Tool!  A lot of food, isn’t it??  Guess how much it cost us?  $1.98 per organic coconut, so all of this coconut milk, coconut pulp, and coconut chips only cost us $3.96!  That’s it!  The Coconut Tool is a time saver AND a money saver!